Save Variables between executions of program

I apologize if this a stupid question. I am still really beginner in programming.

I am making a Windows Forms program, in which is a button which increases a Variable with every button press.

I want the Variable to be saved between executions of the program. For example user 1 presses the button a few times up to 7 and closes the program. User 2 then opens the program and the number is 7 and not 0.

Well this is not the best solution but for the beginner it's OK, you can write your data in a file and read it every time your app opens like this:

first define int num; out of scope of function for example on top of it like this:

and for reading put this in your form load

remember this is not the best way, you will learn the better solutions soon!

You can use an INI file and make an entry for each variable you need. Look at Reading/writing an INI file .

This is a built-in mechanism for this, called Application Settings.

So you have a form with two labels, of which Label2 holds the value. The button button1 increments the value. 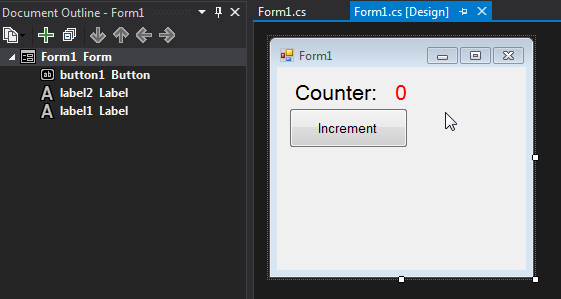 Go to the project settings and create one string setting called CounterText.

Now we need three event handlers for the form.

Now every time the form runs, it will read the application settings and set the value of the text label correctly. Also when the button is pressed and the setting is changed, the label is updated automatically because if the DataBindings defined. 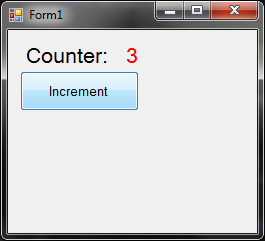 What happens in the background is that an XML file is saved under %appdata%\Local\WindowsFormsApp1\1.0.0.0\user.config or whatever the name of your application is. The contents are as follows: