I'm working on a server project and the server has a few different, independent layers and a few singleton classes. And I use the SimpleInjector, an IoC container, all across the layers. The full, executable example source code is available at https://github.com/DamonJung/TestAdvanture001.. ( It's unnecessarily lengthy because I was trying to reproduce a different problem there. )

I access the Singleton from Main method directly and indirectly from the IoC container.

I expected the Singleton should be instantiated only once and the static instance should have the exact same memory address in the application, no matter where it's being invoked from and no matter how it's constructed ( by Main or the IoC container )

However, as the console output is saying, it didn't work that way. The Singleton's Instance shouldn't have been instantiated more than once. But they ended up having a different address on their own. 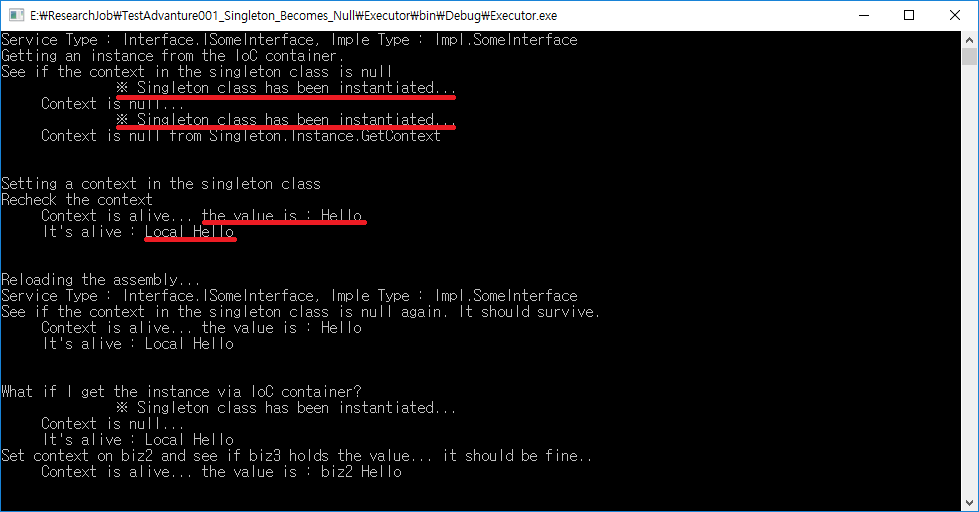 If my shallow understanding serves me right, the executable loads the dll into its own memory, and once the static member is created, the variable can be accessed throughout the AppDomain region.

Isn't this confirming the fact about static variables, isn't it?

A non-static class can contain static methods, fields, properties, or events. The static member is callable on a class even when no instance of the class has been created. The static member is always accessed by the class name, not the instance name. Only one copy of a static member exists, regardless of how many instances of the class are created. Static methods and properties cannot access non-static fields and events in their containing type, and they cannot access an instance variable of any object unless it is explicitly passed in a method parameter.

I was in search for the relevant read in SimpleInjector's documentation and found none. Reading about dynamic linking library and its memory management doesn't come right at me ( I shall be reading it further and over and over again anyway ! )

Above items would be my ultimate questions.

The first one is created by the following code

This way only the Singleton class create itself.

To register your singleton in SimpleInjector you can use the RegisterInstance method :

By the way it is more common to let the container manage instances by itself and not rely on static property which could indicate that you are using a service locator which is a common anti pattern.

This way SimpleInjector will create only one Singleton instance for the container.