Is it possible to performa dplyr operations with pipes for single rows of a dataframe? For example say I have the following a dataframe (call it df) and want to do some manipulations to the columns of that dataframe:

This code sets one column equal to the sum of that column and another. What if I want to do this, but only for a single row?

I realize this is an easy operation in base R, but I am super curious and would love to use dplyr operations and piping to make this happen. Is this possible or does it go against dplyr grammar?

Here's an example. Say I have a dataframe:

The first example I showed:

would result in column a being 2 for all rows.

The second example would only result in the first row of column a being 2.

You can mutate() and case_when() for conditional manipulation.

mutate() is for creating columns. 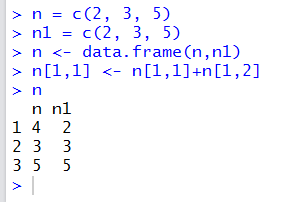