does neo4j have a minus operator

I am trying to compare two graphs using cypher.

I'm fairly new to cypher, so am not sure if this is the right approach or not, but if I were to do this using SQL, I would use a NOT IN or MINUS query. I have also tried to read the graph algorithms plugin for neo4j - I suspect that one or more of these may be helpful, but I really have no idea where to start with them.

I note that cypher has UNION and UNION ALL operators, but not a MINUS operator, so how would I do this in cypher? Again if I were using SQL, I could achieve the desired result easily with MINUS.

Firstly, here is a diagram of my graph: 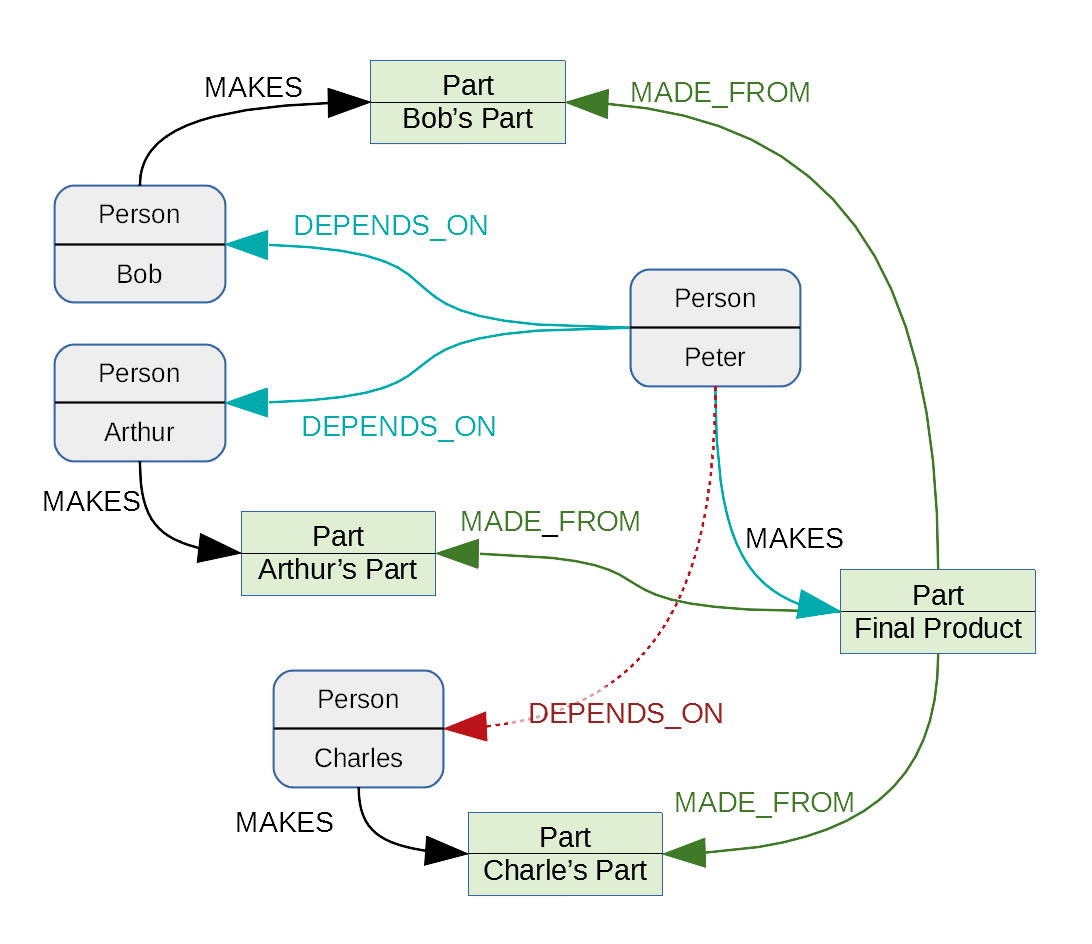 Basically there are People and Parts. People make a Part. For example "Bob" makes "Bob's part".

There is a dependency between the parts. For example, the "Final Product" is made from "Bob's Part", "Charles' Part" and "Arthur's Part".

The algorithm I am using is:

Sadly, due to a mess up the red DEPENDS_ON relationship is missing, so the results of the two queries above do not match.

Following is my sample data note that the record Peter,Charles,depends is missing:

Here is the code that I have so far, it loads the graph from the above file and shows the two queries that I would like to use with the MINUS operator.

And finally the queries that I am working with to produce the "Report" that I need:

The final answer set is what I am looking for. This is showing me that the "red relationship" between Peter and Charles is missing because:

So how can I do this using cypher? Or am I totally barking up the wrong tree with this approach????

There's a bit of a mind step in switching from SQL to Cypher. Try to think less about the 'tables' and more about the 'relationships'. It takes a bit of doing, but when it clicks, everything starts to become a bit more obvious.

This query will give you want you want to know:

Basically, it looks for a person m who makes a part x which is made from part y which, in turn, is made by person n where m is not connected to n. The way the query is written ensures m and n are different people and x and y are different parts.

These types of reflexive 'join' are a nightmare in SQL, but relatively easy in Cypher.